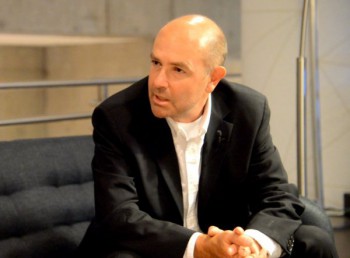 Chris Anderson, CEO of 3Drobotics, granted us a long exclusive interview. He’s based in the USA, but he was in France as a key speaker for the USI 2015 by Octo Technology event that was held in Paris. You can view his keynote here. He kindly agreed to answer our questions, and here’s the full transcript!

Frédéric Botton : Chris Anderson, you were in charge of Wired, the magazine. Why did you jump on the drones market? That’s something different!
Chris Anderson : It’s funny, my background is not media. It is computational physics. The problem, when I learned computational physics, 20 years ago? It was too hard! There weren’t enough physics laboratories, so I had to do something else. I did media, I wrote about technology rather than doing it. But over those 20 years, technology has become easier. Smartphones, in particular, have made sensors, GPS, cameras and fast processors available to everybody. Around 2007, I realized that it was possible to use my interest and my training to do computational physics again, but in the form of flying robots. I started playing around with sensors and GPS. I was actually trying to do something interesting for my children, to get them interest in robotics. They weren’t interested in rolling robots, they were not interested in flying things, but if the robots could fly, that would be more interesting. 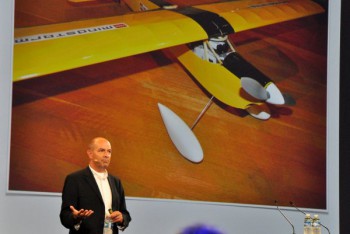 FB : What was your platform back then?
CA : It was originally a set of Lego Mindstorms, then only later it became Arduino. 2007 was the key year. That was the year where all the parts came together: 3D printing, Arduino, and the “maker” movement. For sensors, there were the Wii controllers and Lego Mindstorms. I realized that I could finally do cool things, so I started a community called DIYdrones. That community took off, and then the community turned into a company, 3Drobotics. And at a certain point, it became obvious this was an industry. The company was already quite big at that point, so I just left running one company to run another.

FB : 3Drobotics is not very popular in Europe, as opposed to French brand Parrot or DJI. Will the Solo device you’ve just announced show a significant change in 3DR’s commercial strategy?
CA : Yes, absolutely. 3DR is the leading drone platform in the world outside of DJI. But as a company, we really sold to only developers mostly, and we only sold in the United States because of FCC and regulations. We didn’t go through the European regulatory certification process, until we have a consumer product. That’s the Solo !

FB : Iris is not a consumer product?
CA : Iris is a developer product! So now Solo is the first one that’s gone through EU certification process. It will become available in Europe in September. And France is I think going to be our first market. Big market! 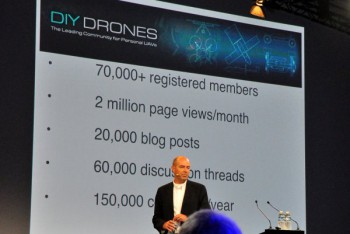 FB : Would you sum up five, only five, features on the Solo device that are not available in any other device?
CA : We have two things in particular. One is smart, and the other is Gopro. I know that’s only two and you asked for five, but I’ll get to it. Smart is very important to what we do. Smart means autonomy. Solo is not a radio-controlled toy, it’s a fully autonomous drone. And it’s not just that you use autonomy to do nice shots, it can follow cinematic paths and views you couldn’t get with your hands.

FB : So the Solo device is not a RC device?
CA : It’s a fully autonomous drone. It’s a camera platform. Let me give you an example. So the first thing we all did was getting vehicle supply. And that was hard. But we did it. And we put cameras on them. And we’d be like whooo, flying camera. And it turns out there more to a great cinematic aerial view than just putting a camera in the air. There’s a certain path, you need to know how to follow somebody, to keep a certain speed of the yaw, and those things that Hollywood knows. These things that make images look good on screen. It’s very hard to do manually, you don’t have enough thumbs. You have to control 3 degrees in the vehicle, 3 degrees in the gimbal, so that’s 6 degrees of freedom that you have to move simultaneously to get that super smooth path. Humans can’t do that, but robots can do that really easily. By smart, we say “here’s a shot, follow a path from point A to point B that looks beautiful, using the best of Hollywood skills”. 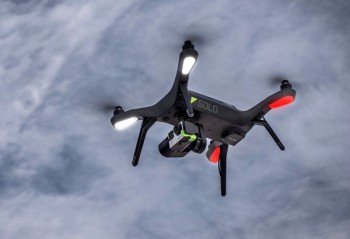 FB : Do you provide developers with a SDK to achieve this?
CA : Yes, and actually 3 SDKs, based on the Android platform. If you to http://dronekit.io, you’ll see there are the 3 SDKs. We have what’s called Air, Ground and Cloud. And you can run code at every layer, or simultaneously in a low distribution of your computational tasks across the entire stack.

FB : As opposed to DJI or Yuneec, you provide no camera…
CA : Just a thing that make the difference is the Gopro. We love Gopro, which comes from the Silicon Valley, we think it is a great brand. But the problem with Gopro is because it’s just a closed box, it’s difficult to get the same control you get from a vehicle. So we did a deal with Gopro to have access to the camera’s bus, the little port at the back of the Gopro. You’ll see that our Solo gimbal is not only connected to the autopilot, but also you can turn the camera on and off, you can change mode, you can start, you can stop. You pipe HDMI all the way through the gimbal and then record on the phone as well as onboard.

FB : Gopro is willing to launch a device…
CA : Gopro has certainly talked about launching a drone, but that’s next year. In the meantime, they partner with us and they’re working very closely on insuring our drone is the best Gopro experience. 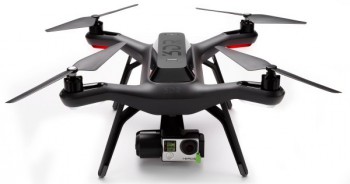 FB : The Solo carries a huge computing power. What is it going to be used for?
CA : There are 14 processors, but the main one is the autopilot which is called Pixhawk 2. It’s a redundant system, so it’s 2 autopilot basically built in. It’s got internal vibration damping, it’s quite advanced. But that’s only the autopilot. Then there’s a Linux computer, and that’s a higher level of mission planning and pathfinding.

FB : What can we expect then?
CA : Well, the first thing you’re gonna see is more pathfinding. Let’s take something simple like you’re flying and you’re getting in trouble. So you have a few options. You can fly home if you’re a good pilot, and most people aren’t. You can press the Home button of course, but the device is going to come straight and might hit something. Or you can “rewind”. It’s remembering the entire path and can rewind along a safe path. 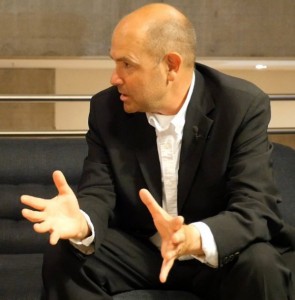 FB : So applications will be available from anybody?
CA : We’re exactly like Android. An Android phone has got an operating system that’s made by Google. It’s got hardware which is made by lots of manufacturers, almost all the Chinese companies outside of DJI. Walkera, HobbyKing, Yuneec, and they all use our software.

FB : You may have hear about flight over nuclear power plants and flight over Paris, obviously illegal. Laws are being reinforced. What can you do as a manufacturer to help pilots?
CA : We can do a lot! One of features I’ve mentioned was smart. Being smart is knowing how to fly safely. The device is connected to the Cloud, all the time, automatically. Let’s assume you’re not a bad guy. You don’t know if it’s safe to fly. Because the device is connected to the Cloud, we can provide elements for a safe flight. When you start the device is that, because you’re online, it sends 4 data: who, what, where, and when. Who’s the pilot? Right now we know little about the pilot, but later we’ll know his experience in flight, his experience on the simulator. Like in a video game, as you level up, you get more powers. Where? is given by the GPS. What? is the device you’re flying. A Solo or another vehicle. And we know when?, obviously. We send that to the Cloud. 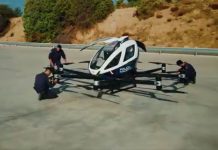 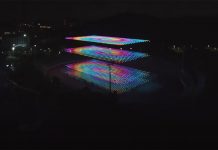 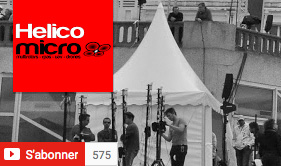